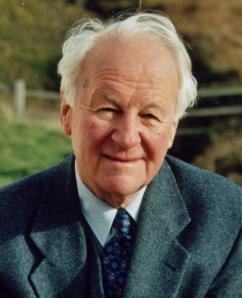 We must allow the Word of God to confront us, to disturb our security, to undermine our complacency and to overthrow our patterns of thought and behavior.

Apathy is the acceptance of the unacceptable.

Greatness in the kingdom of God is measured in terms of obedience.

Perhaps the transformation of the disciples of Jesus is the greatest evidence of all for the resurrection.

The Bible isn’t about people trying to discover God, but about God reaching out to find us.

Good works are indispensable to salvation – not as its ground or means, however, but as its consequence and evidence.

Sin and the child of God are incompatible. They may occasionally meet; they cannot live together in harmony.

I could never myself believe in God, if it were not for the cross. The only God I believe in is the One Nietzsche ridiculed as ‘God on the cross.’ In the real world of pain, how could one worship a God who was immune to it?

He laid aside his immunity to pain. He entered our world of flesh and blood, tears and death. He suffered for us. Our sufferings become more manageable in the light of his. There is still a question mark against human suffering, but over it we boldly stamp another mark, the cross that symbolizes divine suffering.

We should not ask, “What is wrong with the world?” for that diagnosis has already been given. Rather, we should ask, “What has happened to the salt and light?”

These then are the marks of the ideal Church – love, suffering, holiness, sound doctrine, genuineness, evangelism and humility. They are what Christ desires to find in His churches as He walks among them.

It was your great American wit, Mark Twain, who once said, “Man is the only animal that blushes, and the only animal that needs to.” We are ashamed, are we not, of things we’ve done in the past? Nobody is free who is unforgiven. Instead of being able to look God in the face or to look one another in the face, we want to run away and hide when our conscience troubles us.

[E]very heresy is due to an overemphasis upon some truth, without allowing other truths to qualify and balance it.

Christian giving is to be marked by self-sacrifice and self-forgetfulness, not by self-congratulation.

The chief occupational hazard of leadership is pride.

The very first thing which needs to be said about Christian ministers of all kinds is that they are “under” people as their servants rather than “over” them (as their leaders, let alone their lords). Jesus made this absolutely plain. he chief characteristic of Christian leaders, he insisted, is humility not authority, and gentleness not power.

When I enter the pulpit with the Bible in my hands and in my heart, my blood begins to flow and my eyes to sparkle for the sheer glory of having God’s Word to expound.

Jesus never concealed the fact that his religion included a demand as well as an offer. Indeed, the demand was as total as the offer was free. If he offered men his salvation, he also demanded their submission.

The Christian landscape is strewn with the wreckage of derelict, half built towers—the ruins of those who began to build and were unable to finish. For thousands of people still ignore Christ’s warning and undertake to follow him without first pausing to reflect on the cost of doing so. The result is the great scandal of Christendom today, so called “nominal Christianity.”

Many people visualize a God who sits comfortably on a distant throne, remote, aloof, uninterested, and indifferent to the needs of mortals, until, it may be, they can badger him into taking action on their behalf. Such a view is wholly false. The Bible reveals a God who, long before it even occurs to man to turn to him, while man is still lost in darkness and sunk in sin, takes the initiative, rises from his throne, lays aside his glory, and stoops to seek until he finds him.

The Gospel is good news of mercy to the undeserving. The symbol of the religion of Jesus is the cross, not the scales.