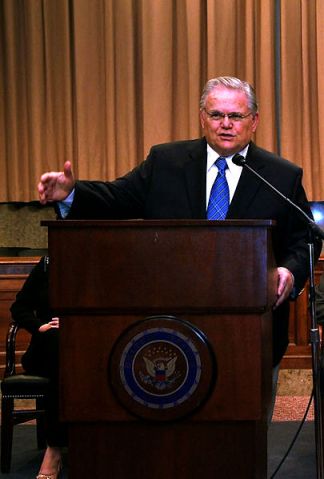 A pure heart won’t get us out of conflict and controversy. It may well be the very thing that gets us into it.

Since my money is God’s money, every spending decision I make is a spiritual decision.

Meekness enables us to be led by the Spirit of God.

A church can be unified in one of two ways. You can freeze together, as the Church of the Frozen Chosen; or you can melt together with the fire of the Holy Spirit.

Do you ever wonder what it would be like to visit a New Testament church service? I imagine it would be a far cry from our stately sanctuaries with their crystal chandeliers and misty-mauve carpets.

The vital Christian arouses opposition because he is a standing rebuke to the selfishness and sin of those around him.

When your thoughts and opinions become intellectual gods in rebellion against the Word of God, you are in idolatry.

In the heart of every man lurks a sense of inner wrongness and a conscience that will not be silenced.

We are indeed the light of the world–but only if our switch is turned on.

Mercy requires that we learn to love others, to value their welfare more than our own!

Some people seem to be at peace–but in fact they’re just resting up between fights.

Paul never developed a negative attitude. He picked his bloody body up out of the dirt and went back into the city where he had almost been stoned to death, and he said, “Hey, about that sermon I didn’t finish preaching–here it is!

Truth is not what I say it is, and not what you think it is. Truth is what God’s word says it is.

Tithing is God’s financial plan for world evangelism and your personal success. Tithing is what he church did before bingo.

When you get up in the morning have something that’s on God’s agenda, and do that.

Happy are those whose self-centered lives have been crushed and reshaped by the Master’s hand to be full of mercy.

He remembers our frame and knows that we are dust. He may sometimes chasten us, it is true, but even this He does with a smile, the proud, tender smile of a Father who is bursting with pleasure over an imperfect but promising son who is coming every day to look more and more like the One whose child he is.     A.W. Tozer

Many saints today are stricken with sickness, weakness and suffering; God is chastening them that they may present their bodies to Him a living sacrifice.  Watchman Nee

A coach is someone who can give correction without causing resentment.
John Wooden

Listen to advice and accept correction, then in the end you will be wise.   Proverbs

Being open to correction means making ourselves vulnerable, and many people are not willing to do that.   Myles Munroe

As the books of Job, Jeremiah, and Habakkuk clearly show, God has a high threshold of tolerance for what appropriate to say in a prayer. God can “handle” my unsuppressed rage. I may well find that my vindictive feelings need God’s correction – but only by taking those feelings to God will I have the opportunity for correction and healing.   Philip Yancey

We want, in fact, not so much a father in heaven as a grandfather in heaven: a senile benevolence who, as they say, “liked to see young people enjoying themselves” and whose plan for the universe was simply that it might be truly said at the end of each day, “A good time was had by all.”   C. S. Lewis

You will never know how much you believe something until it is a matter of life and death.” “If you think of this world as a place intended simply for our happiness, you find it quite intolerable: Think of it as a place of training and correction and it’s not so bad.   C.S. Lewis

All are wicked to some extent or other. Therefore, everyone needs correction; and everyone has to be educated and guided into the right path.   Atharva Veda

Let us pray, therefore, and implore of His mercy, that we may live blameless in love, free from all human partialities for one above another.  First Clement 50

The world has lost the power to blush over its vice; the Church has lost her power to weep over it.   Leonard Ravenhill

A wife who is 85% faithful to her husband is not faithful at all. There is no such thing as part-time loyalty to Jesus Christ.    Vance Havner

Because we are continually growing in the Lord, preachers and lay people alike must be open to the Lord’s correction.   Unknown

Our attitude is very important. “Be kind and tender to one another. Forgive each other, just as God forgave you because of what Christ has done” (Ephesians 4:32). It is then that we are more able to “speak the truth in love” (Ephesians 4:15).

The Bible prescribes the procedure for confronting a sinning brother or sister in an extensive passage on church discipline: “If your brother sins against you, go and show him his fault, just between the two of you. If he listens to you, you have won your brother over. But if he will not listen, take one or two others along, so that ‘every matter may be established by the testimony of two or three witnesses.’ If he refuses to listen to them, tell it to the church; and if he refuses to listen even to the church, treat him as you would a pagan or a tax collector” (Matthew 18:15-17)

So, when should Christians talk to or try to correct a fellow Christian? When we have talked to the Lord first, have an attitude of submission and concern for the other person, and are committed to following the procedures outlined in His Word for such a situation.

Some people probably think of the Resurrection as a desperate last moment expedient to save the Hero from a situation which had got out of the Author’s control. C.S. Lewis

He alone can believe in immortality who feels the resurrection in him already. Frederick W. Robertson

In many respects I find an unresurrected Jesus easier to accept. Easter makes him dangerous. Because of Easter I have to listen to his extravagant claims and can no longer pick and choose from his sayings. Moreover, Easter means he must be loose out there somewhere. Philip Yancey

The seed contains the pattern for the plant that grows. All the genetic code for an entire oak tree is contained inside the kernel of the acorn. Likewise, our resurrection bodies will bear a resemblance to the body that is buried – but with a far greater glory. We will be ourselves, only perfect. And the decomposition of the earthly will only facilitate the remaking of a glorified resurrection body – with none of the flaws of the old, but with all that is necessary for a perfect existence in heaven. John MacArthur

If a skillful workman can turn a little earth and ashes into such curious transparent glasses as we daily see, and if a little seed that bears no show of such a thing can produce the more beautiful flowers of the earth; and if a little acorn can bring forth the greatest oak; why should we once doubt whether the seed of everlasting life and glory, which is now in the blessed souls with Christ, can by Him communicate a perfection to the flesh that is dissolved into its elements? Richard Baxter

The Resurrection is the central theme in every Christian sermon reported in the Acts…The first fact in the history of Christendom is a number of people who say that they have seen the Resurrection. C.S. Lewis

Be thou comforted, little dog, Thou too in the resurrection shall have a little golden tail. Martin Luther

Our Lord has written the promise of resurrection, not in books alone but in every leaf of springtime. Martin Luther

Jesus’s resurrection is the beginning of God’s new project not to snatch people away from earth to heaven but to colonize earth with the life of heaven. That, after all, is what the Lord’s Prayer is about. N.T. Wright

Our old history ends with the cross; our new history begins with the resurrection. Watchman Nee

We are adopted into God’s family through the resurrection of Christ from the dead in which he paid all our obligations to sin, the law, and the devil, in whose family we once lived. Our old status lies in his tomb. A new status is ours through his resurrection. Sinclair B. Ferguson

I went to a psychologist friend and said if 500 people claimed to see Jesus after he died, it was just a hallucination. He said hallucinations are an individual event. If 500 people have the same hallucination, that’s a bigger miracle than the resurrection. Lee Strobel

Taking all the evidence together, it is not too much to say that there is no single historic incident better or more variously supported than the resurrection of Christ. B.F. Westcott

Thus we may say of our ministers and Christian friends, yet a little while, and we shall not see them, either they must leave us or we must leave them, but it is certain that we must part shortly, and yet not part forever. It is but a good night to those we hope to see with joy in the morning. Matthew Henry

The old world told men merely about to live and to die. Today men think about defeating death and resurrection. Toba Beta

If the thing happened, it was the central event in the history of the earth. CS Lewis

The apathy of the people is enough to make every statue leap from its pedestal and hasten the resurrection of the dead. William Lloyd Garrison

On Easter Day the veil between time and eternity thins to gossamer. Douglas Horton

The seed dies into new life and so does man. George McDonald

What we have at the moment isn’t as the old liturgies used to say, ‘the sure and certain hope of the resurrection of the dead,’ but a vague and fuzzy optimism that somehow things may work out in the end. N.T. Wright

The resurrection completes the inauguration of God’s kingdom. . . . It is the decisive event demonstrating thet God’s kingdom really has been launched on earth as it is in heaven. The message of Easter is that God’s new world has been unveiled in Jesus Christ and that you’re now invited to belong to it. N.T. Wright

For me the most radical demand of Christian faith lies in summoning the courage to say yes to the present risenness of Jesus Christ. Brennan Manning

In a world where the dead have returned to life, the word ‘trouble’ loses much of its meaning. Dennis Hopper

And he departed from our sight that we might return to our heart, and there find Him. For He departed, and behold, He is here. St. Augustine

Do not abandon yourselves to despair. We are the Easter people and hallelujah is our song. Pope John Paul II

“Jesus said unto her, I am the resurrection, and the life: he that believeth in me, though he were dead, yet shall he live.” John 11:25